Here is the second baby

Have you ever experienced a moment in your life that changed everything? That moment happened for me last fall.

My husband Sean and I had been thinking about having a second child for a while but had mixed feelings about it. Our son Jacob was two and a half and we thought it’d be nice for him to have a sibling soon. But we were also perfectly happy just the three of us. Jacob had already changed our lives so much, and we’d slowly found our way to a new normal. Plus, we were getting our independence back, slowly but surely as he got older. We started having more time to ourselves, saw our friends more, and planned a family trip to Hawaii with the grandparents.

But if we were going to have a second, we didn’t want the age gap to be too big, and we didn’t want to get much older, either. We also felt like we could handle another child. We were pros now, right? I had images of a second maternity leave going much smoother than the first, feeling more confident and able to get out of the house more often. Little did I know that the universe had other plans…

We made the decision to start trying, being realistic thinking it could take some time to happen, or not happen at all. But as Jacob ran over to give me a hug one morning, I felt a jolt of breast tenderness and knew right away. The positive pregnancy test followed within a few days. I felt very pregnant very quickly. I expected everything to be a bit faster with a second pregnancy, but I was surprised when I felt quite fatigued and already had a small but noticeable bump between 6 and 7 weeks. My nausea was also a lot worse than during my first pregnancy, and my sciatic nerve, which had only caused me problems late in my last pregnancy, started acting up right away as well. We joked about the possibility of twins or triplets but never seriously thought that would be the case for us.

I went for a dating ultrasound around 7 weeks, figuring it would just confirm that there was a baby and that my dates were right. As the ultrasound technician moved the cold wand and pushed down on my very full bladder, she showed me a tiny baby on the screen.

“Well, we may as well get it out of the way right away,” she said as she moved the wand slightly. “Here is the second baby.”

The moment felt surreal, like I was in a movie or like it was happening to someone else. There was absolutely no logical reason for me to have twins – there was no family history and none of the other factors that increased the likelihood of twins applied to me. The ultrasound appointment continued as she showed me the babies moving, measured them, and told me that everything looked good. I was on my own as Sean was out of town for work, and as I walked out of the office with two pictures of my tiny babies, I was in shock. 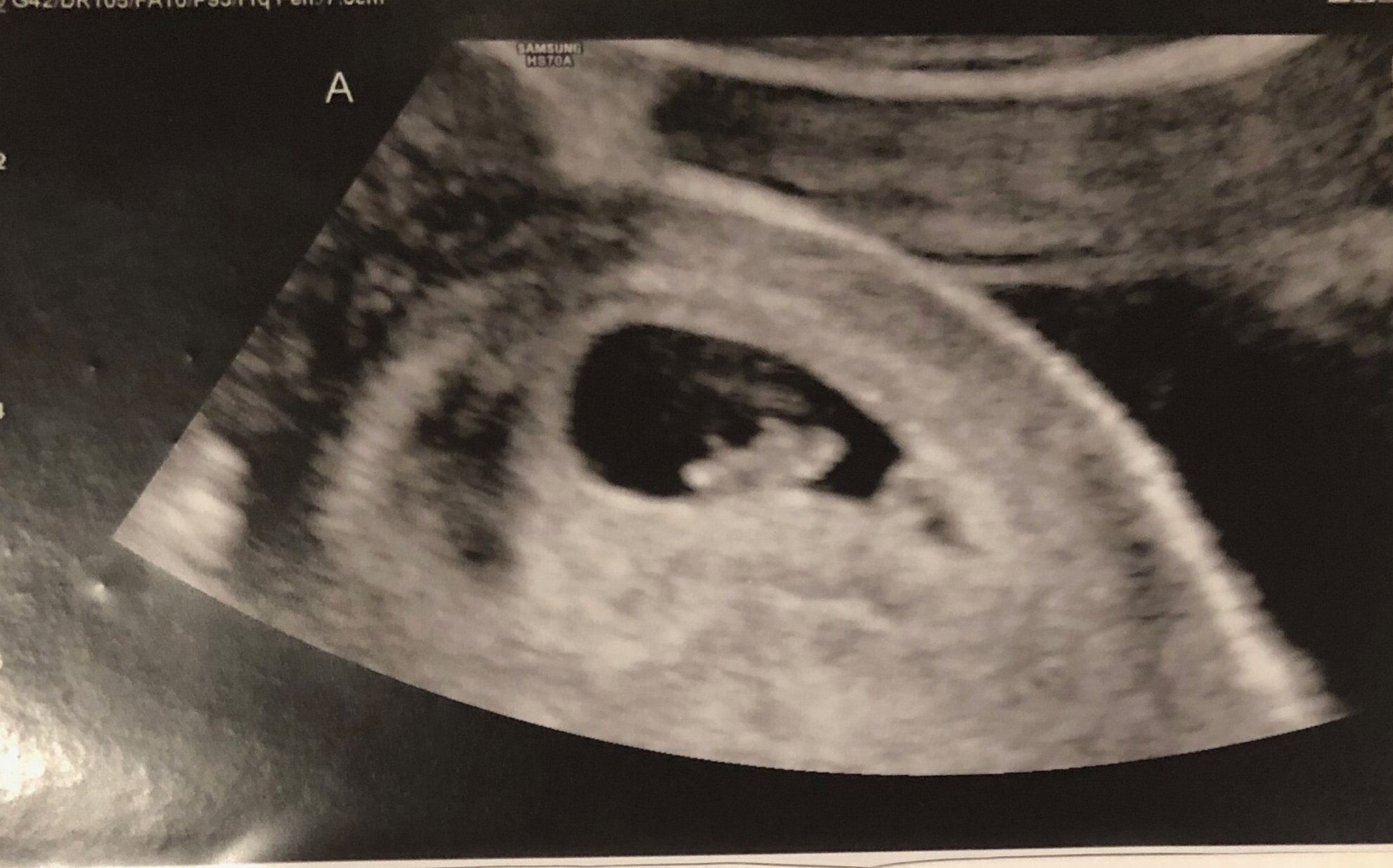 I was bursting to talk to someone, but didn’t want to worry Sean by calling him at work, so I texted him ‘Just got back from the ultrasound. Everything looks good, due date is July 12th. And I got some pictures!’ I relaxed at home, patting our cat, thinking about how this would disrupt her life once again, and started to think about the implications for our family. Holy shit. Twins! We were going from a family of three to a family of five. The kids were going to outnumber us!

I was excited, scared and overwhelmed, and didn’t know what to do next.

Later that day when Sean called while he was driving I asked him to pull over to talk. Obviously he suspected something at that point but was still taken aback by the news. We chatted for a few minutes, both incredulous, as I went to pick up Jacob from daycare. I told Jacob on the way home too, even though he didn’t understand at that point, but it felt right for him to know as his life would forever change as well. Jacob and I had dinner with my parents that night, and I pretended that everything was normal as we weren’t ready to tell family yet.

Life carried on despite this huge life-altering news that we were keeping a secret. Sean and I had some difficulty accepting the news at first. It was going to be a big change from how we imagined our lives turning out. Each having one sibling ourselves, we had planned on being a family of four. Once we had some time to mourn the idea of what our family would look like and start working out the logistical and financial issues, we became more positive. When we were ready we started to share the news with our family and friends. It was lots of fun to see the looks of shock and disbelief every time!

What does this mean going forward? It’s easy to panic (like we did at first) and focus on the downsides – less sleep, more crying, more dirty diapers, more expenses, less independence for a while and more difficulty traveling. We also unexpectedly now need to get a bigger car to accommodate three car seats and three kiddos. But there are so many amazing things, too.

I get to carry two tiny humans inside of me, and experience a pregnancy that will likely be quite different than my first. The twins have built-in playmates from birth onwards, and Jacob will be a big brother and a role model to two younger siblings. There will be two new humans to get to know and help nurture as they grow. We’ll have a big family with lots of love and laughter and chaos.

Jacob now understands that there are two babies in my belly, and talks about everything of his that he will share with the babies once they arrive. The other day when he hugged my belly and said “I love you babies” my heart felt like it was going to burst. While I know it will be a hard adaptation for him, I also know that he will be a great big brother, and that we’ll find a way to make this all work.

As we try to navigate the unknown ahead of us, we’re taking it one step at a time.

It will be more important than ever to be kind to myself, focus on taking care of myself so that I have a healthy pregnancy and can take care of two babies and a toddler, and of course ask for and accept lots of help.

I’ll keep you posted as we go on this journey!

How do you navigate unexpected changes in life? How have you learned to expect the unexpected?

And of course, please share if you have any tips on navigating life with twins!

I’m Valerie Hertzog, a MD and wellness coach that helps busy stressed out women reclaim control of their health.